Show/Hide
City facility availability and services are adjusting in response to COVID-19. Read the latest. 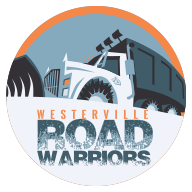 The map will be updated each morning for the previous day's progress. Check out the map today at www.westerville.org/roadwarriors.

The Department of Public Service is responsible for the removal of snow and ice, and prepares throughout the year to ensure the highest level of service. Prior to the first snowfall of the year, staff attends workshops and seminars to keep up-to-date on new techniques and technology that will help the efficiency of snow and ice removal. The preparation of snow removal equipment begins in October and continues through the fall until all available equipment is ready for use.

Get a behind-the-scenes look at how the Public Service Department tackles snow removal for 130 miles of Westerville streets during the winter in the video below.

Resident Responsibilities:
Shoveling your sidewalks is not just the neighborly thing to do, but it's the law in Westerville (see Westerville Codified Ordinance 529.05).

Snow & Ice Control Plan
The Department of Public Service has a multi-level plan of attack for a snow event. Depending on the intensity of the storm and the number of trucks available, a level of service is chosen. Presently, there are actions that involve 6-10 truck plans, plus a 4 truck tandem plan. The Street Maintenance Supervisor updates the annual plan to include any streets installed from the previous year and any improvements in performance from previous years.

Because the Department of Public Service roster of employees is small compared to the population served, the bulk of the employees are assigned to the first shift (7 AM to 3:30 PM). In the event of a large snow event, staff is split into two evenly sized groups. Each group works a 12-hour shift until such time as the storm has passed and all streets have been cleared.

Snow & Ice Control Materials
Recently the Department began pre-treating major arterial streets and bridges with brine to help reduce the effects of ice and increase the efficiency of plowing snow when needed. The brine helps keep ice and snow from adhering to the pavement.

The Department utilizes salt as the main ingredient for de-icing streets. An additive is used to increase the melting power of the salt. This product does an excellent job of increasing the ability to melt ice and snow.

Snow Removal Policy
The snow removal policy is to clear the most highly traveled roadways and streets that service the hospital and schools first. Emergency travel for fire, emergency medical and police personnel is the biggest snow removal priority. This is why arterial and secondary streets are cleared first. The second priority is to clear streets around schools and to facilitate traffic moving in and out of the city, which also impacts first- and second-tier roads. The third priority is to clear subdivision, including courts, dead end streets and alleys. Subdivisions are cleared last because they carry the least amount of traffic.

There are several plans developed to handle snow removal. The number of trucks assigned and the plan implemented during any given storm is dependent on the severity of the storm.

Salt Spreading & Plowing Procedures
Snow plowing is not productive until snowfall reaches a depth of two inches. For any storm, crews will begin by spreading de-icers in an attempt to get a layer of brine against the pavement.

If accumulations exceed two inches crews will begin plowing as they spread de-icers. During intense storms, the spreading of de-icers will be discontinued and crews will plow until such time as snowfall stops.
As the last step in the clean up from a storm, the area of the street adjacent to the gutter will be plowed back. This is done to allow melting materials to run off and ultimately reach the gutter. This will reduce the number of icy patches that occur during evening refreezing.

Parking Limitations
In the City of Westerville a snow emergency is declared, automatically, any time snowfall reaches a depth of three inches. The person in charge of snow removal at the time the three-inch limit is met will ensure contact is made with local media advising that a snow emergency is in effect.

Residents are asked not to park their vehicles in a manner that will impede the dump trucks from navigating the streets in order to spread the salt or plow the snow. Streets that are not passable will not be able to have the snow removed.

Time & Patience
It can take a lot of time and effort to clear the pavement areas on the streets of the City of Westerville. The patience of our residents is an added value to the process of quickly clearing streets and neighborhoods. The removal of cars from the street any time there is snow is also extremely helpful.

When clearing a driveway, remember that any snow placed at the curb edge should go on the left side of the driveway (facing the property). This will help reduce the accumulation of snow at the end of the driveway when the street is plowed.