The following pages are dedicated to the veterans who are buried in Olde Methodist Cemetery, Otterbein Cemetery, or Pioneer Cemetery.  The names and information have been gathered from military, cemetery, and family history records that have survived throughout the years.  Family members are encouraged to contact the Westerville Public Service Department if they know of a veteran who has been overlooked, or with corrections to the information provided.

Westerville has a proud history of residents who have served our country.  We honor, and thank, all veterans....past and present.

Note:  At this time only those serving through the World War I and those who died in service are recorded.  We are currently working on those who served in the World War II forward.  View additional veteran lists by clicking on the links.

Revolutionary War
Three veterans of the American Revolution, Simeon Moore, Benjamin Moore and Joseph Ingalls are buried in Westerville, all in the Old Section of Pioneer. 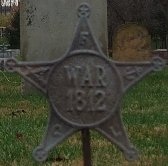 
Civil War
Over 152 veterans of the Civil War are either buried or have a memorial marker in one of Westerville's three cemeteries.  Several were discharged due to injuries and are denoted by an asterisk (*) next to their names.  15 veterans died in service. 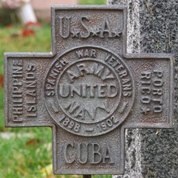 World War
George Budd, Richard Shanor and Curtis Young were killed in action during the World War.  Although all three are buried in cemteries in France there are memorials for each of them in the Old Section of Otterbein Cemetery.  A comprehensive roster of those who served and are buried in Westerville can be viewed using the World War link above.

World War II
In Otterbein and Pioneer cemeteries can be found the graves or memorial markers for 12 veterans killed in action during World War II.  A complete roster of all those who served and are buried in Westerville is being compiled.

Vietnam Conflict
Dingus Banks, Jr. was killed in action during the Vietnam Conflict.  He is buried in the Knox Section of Otterbein Cemetery.  A complete roster of all those who served and are buried in Westerville is being compiled.