The Asian longhorned beetle (ALB) has caused tens of thousands of hardwood trees to be destroyed in Illinois, Massachusetts, New Jersey and New York. Most recently, the ALB has been found in Ohio. Trees in forests and cities all across America are at risk. But with your help, we can stop it. Learn more. 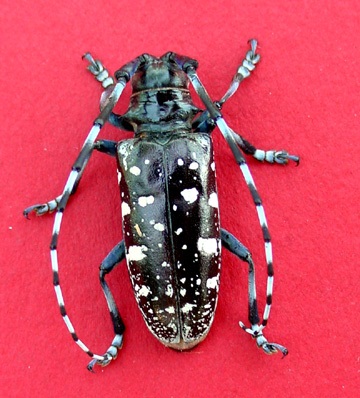 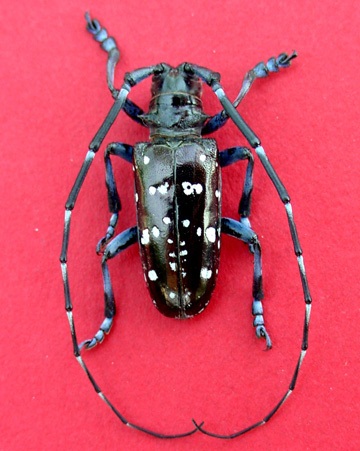 The Asian Longhorned Beetle, also known as the Asian Cerambycid Beetle, was first discovered in the United States in 1996, when it was found attacking maple and horsechestnut trees in New York City.

Asian Longhorned Beetle
The Asian longhorned beetle, also known as the Asian cerambycid beetle, was first discovered in the United States attacking maple and horsechestnut trees around New York City in 1996.  Infestations have also been detected in Chicago, three New Jersey counties, and six Massachusetts cities. In 2008, the infestations of Chicago and Hudson County, New Jersey were declared successfully eradicated.
In June 2011, the first Ohio infestation in trees was discovered near the village of Bethel in Clermont County. The insect was previously found associated with solid wood packing and crating materials in warehouses located in Cincinnati, Columbus, and Loudonville. However, an infestation of living host trees has never been detected in these cities.

Beetle Description
The Asian longhorned beetle (ALB),  Anoplophora glabripennis, is native to Japan, Korea, and southern China. Experts believe that the beetle “hitchhiked” to the U.S. during the early 1990's in solid wood packing or crating materials on a cargo ship arriving from China.
ALB is a serious pest of hardwood trees in its native environment, where it has few natural enemies. In the U.S., where no natural enemies exist, the insect is extremely destructive to our trees and forests. The beetle attacks many different hardwood trees, including maple (all species), horsechestnut, buckeye, poplar, willow, elm, birch, London plane tree, sycamore, mimosa, katsura tree, hackberry, ash, and mountain ash. Trees of any age may be attacked, however, trees 4 inches in diameter and larger are preferred. Beetles will attack both stressed and healthy trees, which makes them an even greater threat.

Beetles are 0.75 to 1.50 inches long (not including antennae), shiny black with bright white spots and blue tinted legs. Each adult has a pair of curved, black-and-white striped antennae that are even longer than the body. Adults emerge from trees during May, June, and July and can live for up to 66 days. They feed on plant shoots for a few days and then mate. After mating, females chew rough, oval pits in the bark of host trees, where they lay eggs.

When the eggs hatch, the white grub-like larvae bore into the wood. Larvae mature inside the tree until they become adults and chew round, 3/8 inch (nearly dime-sized) exit holes in trunks and branches, from which they emerge. This life cycle produces new adults every year, rather than every 2-4 years like most other longhorned beetles. Although ALB can fly up to 400 yards, they typically do not leave their host tree. In China, studies show that infestations generally spread less than 1000 ft/year.
Since an effective method for trapping this specific pest does not exist, areas must be surveyed for the presence of the beetle by carefully examining hardwood trees for signs of infestation. Large round exit holes with smooth edges, often oozing sap, are a strong indication of ALB activity. Frequently, piles of frass (insect waste and sawdust) are found at the base of infested trees and in branch crotches. Leaves of infested trees may also exhibit unseasonable yellowing or drooping. Eventually, larval tunnels sever the cambium (living part of the tree trunk), which disrupts the flow of water and other materials and kills the tree.

ALB spends about 9 months of the year inside the tree, making it nearly impossible to kill with insecticides. The only way to control existing ALB outbreaks is to remove and destroy infested trees; an expensive operation. As of 2008, total state and federal costs for ALB eradication programs, added up to about $373 million. Early detection of infestations is very important, since it limits the infested area and the number of trees removed. The best way to fight this insect, and similar non-native wood borers, is to exclude such pests from the country in the first place. More stringent rules governing packing materials used on cargo ships from China are currently being put in place to minimize the risk of more accidental introductions of the ALB.
Once introduced into an area, people unintentionally spread the beetle by cutting or trimming an infested tree and moving the wood elsewhere. To stop the spread of ALB, it is crucial for citizens to follow the quarantine procedures in infested areas and not move any regulated material, such as firewood, nursery stock, wood debris, or lumber. Citizens can also help stop the spread of ALB by allowing officials to access property for inspection and, if necessary, eradication work
View Full Site