WATCH OUR PROGRESS: Click HERE to take a video tour of streetscape plans and recent improvements. (NOTE: Best to view in Browser)

As part of the important state highway connecting Cincinnati, Columbus and Cleveland (hence, the name “3-C highway”), State Street has long played an integral role in Westerville’s history. Uptown Westerville-our civic, social, business, and educational core- was founded along this corridor, and from it, radiating outward, a city 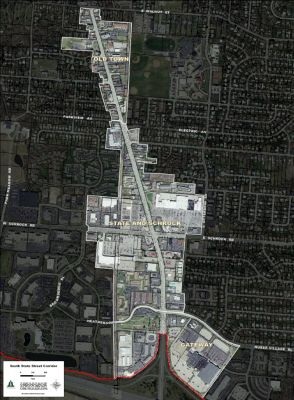 The South State Street corridor, as we know it today, largely developed in the 1960’s and 1970’s and was heavily influenced by the presence of the railroad and Interstate 270 and by automobile usage. As the City of Westerville has matured and reached its planned growth boundaries, our focus has returned to South State Street, the City’s original gateway. City Council and Staff have made improvement of the corridor a priority and for over eight years have been planning for the enhancement, renewal and potential redevelopment along the corridor. Beginning in 2009, residents, businesses, and visitors will begin to see the results of these efforts.

Information about the plans and various projects that have been adopted, scheduled or are currently under consideration is found below. The first three entries pertain to land use/redevelopment and deal with zoning standards, streetscape guidelines, and the 2002 Corridor Study that first identified problems and recommendations for the area. The last two entries provide information on road improvement projects in the South State Street Corridor.  For more information about any of this material, contact Planning and Development at 901-6650.

Special Overlay District
This Special Overlay District (SOD) implements some of the recommendations of the 2002 South State Street Corridor Study regarding redevelopment of the Corridor. The Overlay is intended to unify the corridor’s development pattern by regulating primarily the scale, alignment, and composition of buildings; parking and loading; site amenities; landscape design; lighting; and graphics. The Overlay is also aimed at facilitating pedestrian connections to adjacent neighborhoods as well as better connecting the corridor to its surroundings.

2002 Corridor Study
The South State Street Corridor Study (adopted - 2002) represents the first step in the City's effort to facilitate redevelopment in the Corridor. The Study identified a number of problems in the corridor, including traffic congestion, changing land uses, aging shopping centers, unattractiveness, and lack of identity, and made recommendations on how to improve the existing conditions.

S State Street/Huber Village Blvd Intersection
This project will provide capacity improvements at the South State Street and Huber Village Boulevard intersection; most notably, it will provide dual northbound and southbound left turn lanes and an additional southbound lane starting at King Arthur and extending to Club Dr where it will tie into the ODOT SR 3 Safety Improvements project. Construction is scheduled for 2010.

SR 3/I-270This project will provide dual use lanes and designated left turn lanes in the SR 3 corridor from SR 161 to Huber Village Boulevard. The greatest impact for Westerville will be the elimination of the long sweeping “slip ramps” at I-270/SR3 north of I-270 with new continuous ramp lanes being provided at the existing signalized intersection. An additional southbound lane will be added from Club Drive to the slip ramp signal, the signal will be upgraded to a mast arm style and brick placed in the median. In conjunction with these improvements the City will install entry signage, decorative fencing, street lighting and landscaping. Construction is scheduled to begin in 2011.